A ban on people travelling to Wales from coronavirus hotspots elsewhere in the UK has come into effect.
First Minister Mark Drakeford announced the rules on Wednesday after twice asking Boris Johnson to stop people from English hotspots from travelling.
The ban covers all of Northern Ireland, England’s tier two and three areas and the Scottish central belt.

2020 has been a year like no other for the RNLI. Our lifeboat crews and lifeguards have continued to risk their lives to save others during the lockdown.

Over the past 6 months, all of the RNLI’s stations continued service every single day. Our crews have been missing family occasions and dinners to answer the call from those in peril. Unfortunately, our ability to raise funds has been significantly impacted by the lockdown and we are currently projecting a £60m downturn in income at a time when our services are being called upon more than ever.

I really appreciate that fundraising is quite possibly the last thing on many people’s mind at present, but I wondered if members of the Residents Association including the Evergreen Club might be interested in participating in one of the RNLI’s major fundraising campaigns next year; the RNLI Open Gardens 2021.

An Open Garden can be any shape or size, country or urban, private, or public, a grand hall garden or a driveway plant sale.

An online page will be available to register interest in Open Gardens and where people will also be able to download a ‘how to’ guide. More resources, (posters, adverts etc) will be available later in the year. If anyone is interested in taking part, there’s still plenty of time to get involved.

By pledging to host an Open Garden, neighbours, family and friends can get involved too. If anyone would like further information on RNLI Open Gardens, please email: opengardens@rnli.org.uk

The RNLI is also inviting people to join their Open Garden Facebook group where people can share garden images, tips, stories and ask any questions they have.

You don’t have to open your garden to be part of this group. The more who join, the more we will all hopefully benefit and have some fun. mso-fareast-font-family:”Times New Roman”;color:blue;mso-fareast-language:EN-GB”>https://www.facebook.com/groups/270252550739018/

Thank you for your time and if there are any questions, do please feel free to contact me.

Cheshire Police has today launched its new approach to community policing, which will see dedicated police officers assigned to each of the county’s 122 policing areas to tackle crime and support communities.

The initiative has been developed by Police and Crime Commissioner (PCC) David Keane who is striving for Cheshire to be the leading police service for delivering community policing.

It builds on the already successfully delivered initiative to provide a dedicated PCSO and police community base for each area.

The new community police officers will work with their fellow PCSO, the wider policing team, and key partners to build relationships within the community, sharing the same mission to solve problems at their root-cause before they become more serious.

They will spend more time in the heart of their dedicated communities and be given time to deal with issues that matter most to local residents.

Another benefit of the changes is local residents will have more opportunities than ever before to directly contact their officers – either online, through social media, or face-to-face during police surgeries.
The work of the new community policing teams will be supported by a funding package for each community, made available from money seized from criminals under the Proceeds of Crime Act 2002.

This will consist of a £1,000 funding pot for all 122 communities and an additional £10,000 for all eight policing units that local people can bid for to deliver projects which work with the local policing team and key partners to address specific issues.

This now means that you have:

Details of your local police officer, PCSO and community base can be found below: 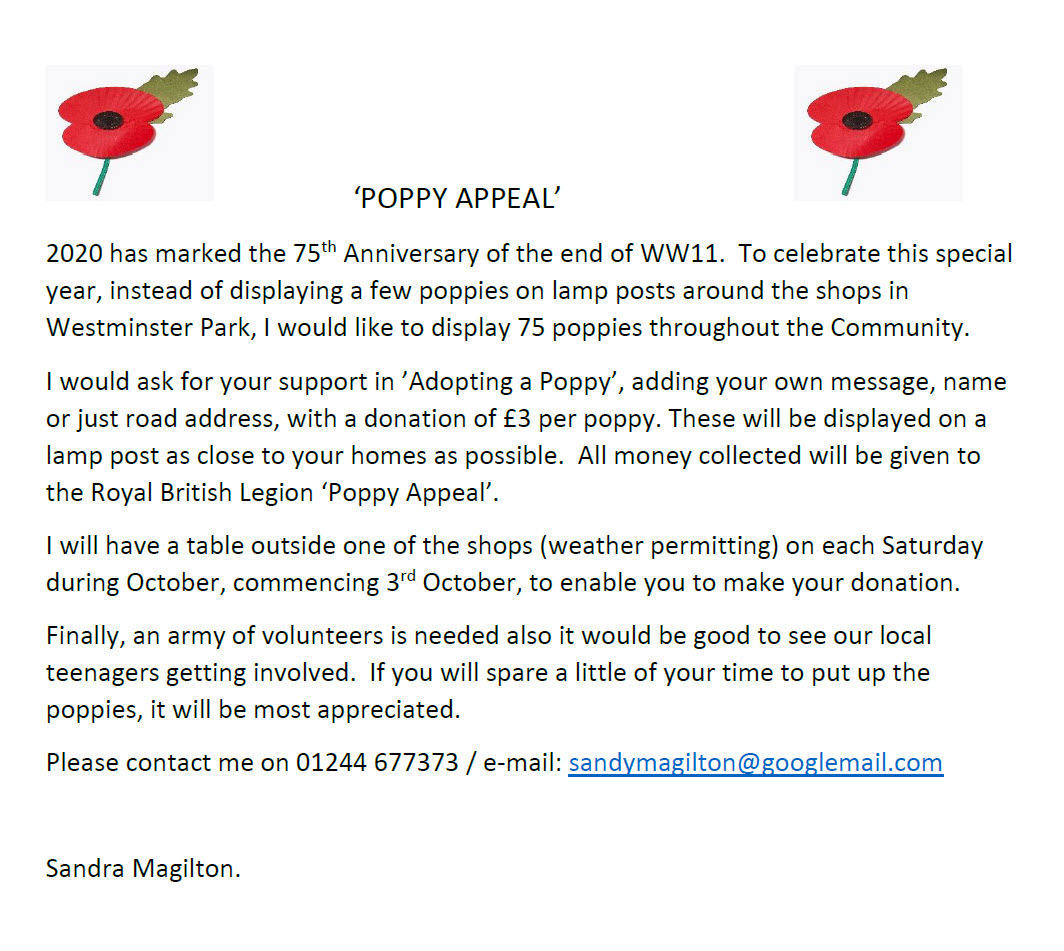 The new cycle lanes are in place for a 6 month trial period and anyone opposing the changes becoming permanent must object within that time.  You can comment by emailing: transport@cheshirewestandchester.gov.uk or writing to: Kieran Collins, Highways Commissioner, Cheshire West and Chester Council, Highways Office, Guilden Sutton Lane, Guilden Sutton, Chester CH3 7EX.

A new walk-through testing site for local residents with Covid-19 symptoms is being set up on the Little Roodee car park, opening on Saturday 5 September. From 6 September it will be open 7 days a week from 8am-8pm. Residents must arrive on foot of by cycle.

Hopefully most of you will have received your printed copy of WP News by now, but for those who prefer an electronic copy or for those who live out of area, here is the September 2020 issue.

If you have any comments or suggestions, please forward them on to me.

Following approval by CWaC for the resumption of activities, FoWP are planning to hold a Volunteer Day on Wednesday 9 September (10.00-14.00). We will meet on the patio outside the cafe at 10.00, applying social distancing and hygiene protocols, to initially agree the division of activities amongst ourselves. There are a lot of tasks on our current list including tidy up of pathways and flowerbeds, cutting back overhanging branches and hedges, undertaking repairs to some of the park benches. Be sure to bring along any equipment that you think would be useful (eg hoes, secateurs, loppers).

If you plan to attend, it would be helpful if you could advise Sue (brittonfamily@btinternet.com) as we need to manage numbers.

We look forward to seeing as many of you as possible on the day. 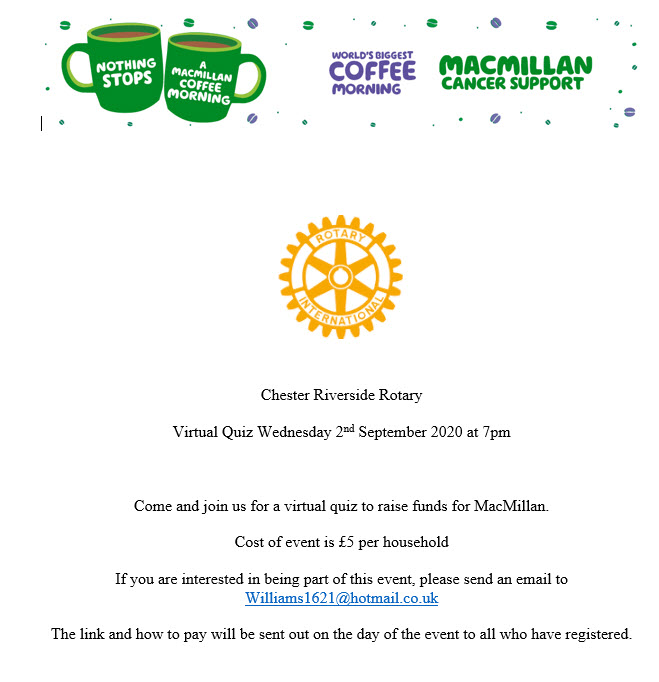 With work now well underway, here are some of the forthcoming expected milestones for the remainder of the year:

Archaeologists working on the Northgate site alongside our contractors, have discovered several Roman artefacts which include what is thought
to be a rare gaming piece made from bone.

The lozenge-shaped gaming piece, see attached, is highly polished, probably from use, is approximately 29mm long and features a common Roman decoration of a ring and dot motif.

Experts link this to the game of Ludus Latrunculorum, meaning the Game of Mercenaries, which was a two-player military strategy board game played throughout the Roman Empire, similar to draughts. Finding it in part of a legionary barracks in Chester would back up this theory. Other artefacts found to date include another bone artefact, possibly a comb; a possible spearhead; and a pin or broach.

With work now well underway, contractor VINCI Construction UK and archaeologists Oxford Archaeology, have been carefully excavating to find signs of Roman life and other historical artefacts. However, despite all of the activity on site at present, the construction will not result in any major intrusion into the important archaeological remains which remain undisturbed as the works proceed.

The development has been carefully designed to avoid disturbance of archaeological remains as far as possible and a comprehensive mitigation strategy overseen by Historic England is in place to ensure intrusions into the most sensitive strata are kept to an absolute minimum. Andrew Davison, Historic England’s Inspector of Ancient Monuments for the North West recently visited the site to inspect the work to date. He said: “Chester residents are unusually knowledgeable about the City’s heritage, including its archaeology, They speak volumes about the quality of the archaeology we

are dealing with at this very significant site.”

Our new hoarding design has now been installed in front of the former library building.

We hope you like our ‘From… to’ rhymes from Chester’s past and present. E.g. From Eastgate Clock… to flaming wok.

Let us have your ideas and we may include them in future hoardings elsewhere on the site.

This information is also available in our latest newsletter if you wish to share:

The portal is used to view and update user details held by the residents association and set your email preferences.

There are no ads matching your search criteria.